And this isn’t your typical pumpkin recipe, and neither are these super-soft, chocolate chip cookies!

It requires no baking, and at least one person is going to ask you for the recipe.

Want me to write sweet nothings to my pumpkin fan friends?

This dessert starts with a browned butter graham cracker crust.

Then, on top of all that gorgeous rich graham cracker goodness you add a layer of homemade cinnamon whipped cream and cream cheese, a mousse-like layer of no-bake pumpkin cheesecake topping, extra whipped cream if you’d like, and toasted pecans — fall perfection!

Did you read that?

Pumpkin paradise that is.

Here’s an in-depth recipe on toasted pecans if you need it!

If you’ve never had browned butter and aren’t quite sure what I’m talking about, you’re really in for a treat!

Browned butter is simply unsalted butter that’s been cooked in a skillet over medium low heat until it literally browns.

It has a lovely toasted nut flavor that adds a special richness in flavor to all sorts of dishes — both savory and sweet.

It’s one of my favorite ingredients to use in fall baking!

The trick to making browned butter is this: don’t rush the process.

It only takes about 5 minutes.

And here’s another tip: It’s impossible to make browned butter in a dark non-stick pan because you won’t be able to see the color change.

Butter can go from browned to burnt very quickly.

If you’re making this for a group where there may be nut allergies and you can’t add nuts, the cinnamon whipped cream layer will make a lovely background for the sprinkled ground cinnamon topping.

No one will miss the pecans!

The recipe is easily scaled and feeds quite a few!

And what’s even better?

It can be made in advance. The crust doesn’t get soggy, so it’s perfect if, like me, you have a tendency to be very involved and volunteer for several roles for any event.

You can see how mouth-watering this dessert is in the video below! 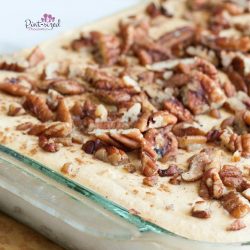 More Inspiration Just for You